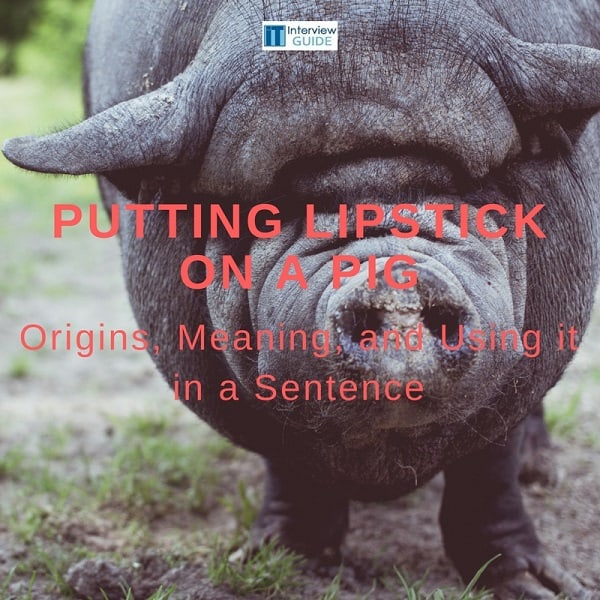 Putting lipstick on a pig is a common rhetorical idiom that refers to the futility of making shallow, empty-hearted, and/or cosmetic alterations to conceal the lacking or faulty essence of a service or product. The expression is believed to have originated in the 20th century USA, but the 21st century coined the expression. It was made popular by former president Barak Obama during a 2008 event. Let?s see how the lipstick on a pig expression came to be.

Origins of the Putting Lipstick on a Pig Saying

Although pigs seem to be common in English idiomatic expressions and figures of speech, this expression is relatively new. The term ?lipstick? first appeared in the 1880s with the invention of the product.

A Baptist preacher used a very similar expression in a book of proverbs. This expression highlighted how, even though a hog wears a silk waistcoat, it will still be a hog. Furthermore, in 1926 a Charles Lummis wrote an article for the Los Angeles Times in which he described the knowledge of the American public about history as similar to the knowledge of a pig about lipstick.

?You can clean up a pig, put a ribbon on it’s [sic] tail, spray it with perfume, but it is still a pig.?

But the exact expression of putting lipstick on a pig?was first officially used by a San Francisco radio host when talking about the plans to refurbish Candlestick Park stadium instead of building a new one for the San Francisco Giants.

In 2002, the exact expression was featured in a TV commercial that aimed to highlight the issues Wall Street brokerage companies perpetuate. A few years later, the Assistant Secretary of Defense for Public Affairs published a book called Lipstick on a Pig: Winning In the No-Spin Era by Someone Who Knows the Game in which she criticized the use of the spin technique which is used by politicians when attempting to present already established policies as new ones.

Using Putting Lipstick on a Pig in a Sentence

You can try to fix the code, but at this point, it would be just like putting lipstick on a pig!

The CEO approved his idea because the presentation was so flashy, but we all know we’ll just be putting lipstick on a pig in the end.?

The putting lipstick on a pig expression has become popular in the US and the UK and is most used when talking about politics or companies. Now, you are able to answer this interview question and provide a few examples of lipstick on a pig from your own professional experience.