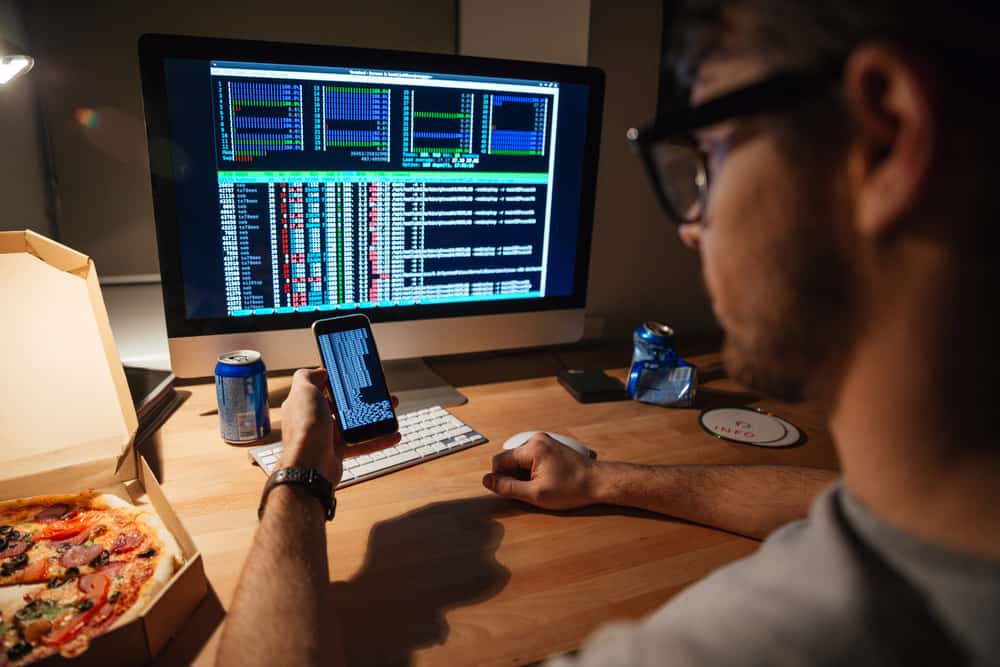 React is an open-source JavaScript library that is used for building front-end user interfaces. It was created by Facebook software engineer Jordan Walke. Facebook, the online social media and social networking service company, and a community of companies and individual developers maintain React, which is used as a base for the development of single-page or mobile applications. React is a front-end library used to create rich internet applications with interactive, stateful and reusable user interface components.

Angular is a platform used to easily build applications for the web, mobile or desktop. It?s used for Single Page Applications (SPAs) and helps extend HTML with new attributes. To use Angular, one should be familiar with HTML, CSS and JavaScript prior to learning Angular. It was started as a way to help developers and designers build applications using simple HTML tags. When Misko Hevery, one of the Angular creators, began working for Google, he used Angular on a project, saving time and coding. Angular is a JavaScript framework with a library that has features to implement complex requirements such as routing, data binding and animations.

Is There a Need for React or Angular?

React came about when Facebook needed to build a dynamic user interface that had high performance. One task that had to be resolved was making news feed updates happen as people used its chat function. Jordan Walke was tasked with optimizing the development process and did so with JavaScript. He used XHP, which is Facebook?s markup syntax, and put it into the JavaScript coordinate system. React worked faster than previous implementations, rendering pages in a faster, different way and making them responsive to user input and highly dynamic.

Generally, the traditional Document Object Model (DOM) is used with a framework. The DOM is the logical document structure for HTML, XHTML and XML files. Web browsers use layout engines to transform HTML syntax into the DOM. A server checks differences caused by changes such as user input and queries to provide the needed response and updates the DOM trees of an entire document. React speeds up the update process by using a virtual DOM, an abstract copy of the real DOM. Updates happen quickly and developers don?t need to find DOM to front-end functionality since elements in React are already connected. Changes can be applied in real time, making programming faster and increasing performance. React can be rendered on both the client and the server.

React components can be reused, so more time is saved. This makes for efficiency, making managing updates easy. React components are isolated so that making a change in one component doesn?t affect the other components.

Code is also more stable in React because developers can work directly with components and use downward data binding, meaning that changes in child structures do not affect parent structures. Explicit data binding is not used, and developers need to modify the state of an object to make changes and apply updates.

React has an open-source library that is open to contributions and is constantly evolving. Applications and tools are constantly being created by developers outside of Facebook.

Angular is supported on several platforms such as web, mobile and desktop. The framework provides tools and design patterns to help build your project in a way that is maintainable. Elements can be moved around corresponding code while designing an app, and markup can be added without breaking the app. It removes the need to add classes and methods that become difficult to modify and test. Code is structured so that you can understand what is happening.

Angular uses TypeScript, a form of JavaScript. It?s not a new language, but you need to be able to use features such as interfaces, namespaces, classes, decorators and static typing. For enterprise-scale applications, TypeScript makes code cleaner because mistakes are more easily found and removed while typing the code. In turn, the quality of the code is more easily verified. It is also component-based, meaning that components can be reused throughout an application. User interfaces can be built with many so-called moving parts, and development courses can be streamlined for engineers. Some components include search boxes, sorting lists and date pickers.

Code in Angular is very readable, allowing new developers in a project to understand what is happening and be more productive. Quality-assurance procedures and unit tests are simpler because components can be tested independently. The components themselves are easy to maintain. The Angular framework has a built-in dependency-injection subsystem that helps with unit testing. It?s able to recognize what your requirements are and offers services instantly.

Angular is also highly recommended for the development of SPAs. Web applications have more functionality, and SPAs have become more responsive, making a web app feel like a native app. Instead of rendering on the server, it happens on the client instead to cut server load and reduce network traffic. A payload of data can be sent instead of a full page. Angular helps make hybrid SPAs out of large applications, creating multiple modules that make up one SPA. It can also help with routing, templates and journaling.

React Versus Angular: When Would These Be Used?

Angular can be used to build any application, but it is recommended for applications that involve data, particularly collecting data from forms and doing something with the data. Besides form-based apps, Angular can be used for large, complex applications and is best if used by a medium or large development team. If the application needs to run in multiple development environments, Angular is a good choice. After learning some concepts, it will only take a small amount of code to do powerful things. While Angular is not the easiest to use, it has been highly tested and is robust and well documented.

React, unlike Angular, is a library, not a complete framework. It is simple and easy to learn. In addition, it can also be combined with other third-party libraries to have powerful capabilities that rival those of large frameworks. It is used specifically for user interfaces, not entire applications. In particular, React builds user interfaces for web applications that are responsive and complex. If working on mobile applications, the same concepts from React can be carried over to React Native. React can be written directly in JavaScript if the application is simple. If there are different components such as dynamic inputs, buttons, user logins, access permissions, expanding and collapsing accordion sections, and navigation items, React is a good choice because it can manage changing states and present different views dynamically based on the state information.

React relies upon a high pace of development. The React environment is constantly changing, forcing developers to constantly learn new ways of doing things. React is also not known for providing good documentation because of the frequent releases of new tools. As a result, developers struggle with integrating the tools with React. The technologies accelerate and update so quickly and often that there is often not enough time to write instructions, which means developers spend time writing their own documentation for the specific tools used in their projects. One last disadvantage is that React uses JSX, a syntax extension that mixes HTML with JavaScript. JSX protects code from injections, computer bugs caused when invalid data is processed. However, JSX is complex and requires a steep learning curve.

Angular is not the smallest nor the simplest JavaScript framework. For small applications, a simpler library like jQuery would be a better choice. It?s not a good choice if you are working on your own app because its development conventions and boilerplate code may be more than what is needed. Learning some of the concepts that Angular builds upon also takes time. There may also be performance issues with Angular, especially if the SPA is complex and large, causing lag times. Learning Angular also requires a steep learning curve, though tutorials and other resources help resolve some confusion and problems, and Angular allows more than one way to complete a task.

Both React and Angular are designed for speed and efficiency. Both are designed for faster coding and development and reduced page-load times. React is good for front-end user interfaces, rendering pages faster, and making them highly dynamic and more responsive to user input. It?s also a good choice for small applications and for individual developers. React has reusable components and updates quickly. For larger applications involving a team of developers, Angular is the better choice because of its easily readable code. It provides structure so that an application can continue to grow. Unit testing and adding components in Angular is also made easier, and Angular runs on multiple platforms.

With Single Page Applications becoming more popular, both React and Angular are good choices, but the one you choose depends on the size and scope of the application and how quickly one can learn to code using one of these technologies. Both are also open source with communities frequently providing updates, though Angular offers better support, documentation and tutorials than React.