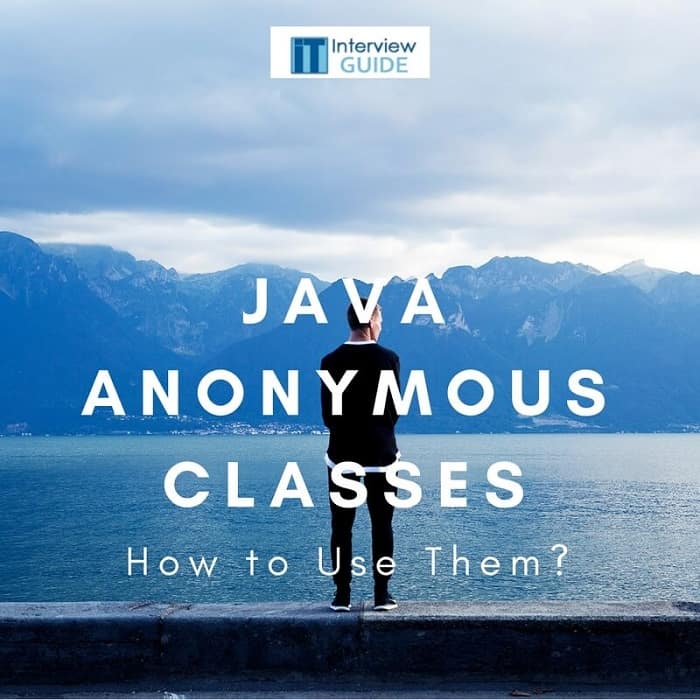 In this article, we’re going to go through the Java anonymous class and how to use it. It is one of the crucial short questions in Java programming that you will probably meet during?an IT interview. Therefore, read this article to get the most elaborate answers on anonymous classes.

What are Java Anonymous Classes?

Anonymous classes in Java are those classes found in other classes and declared without any class name. An anonymous class will enable you to make a more precise code. A class can be declared and instantiated at the same time with the help of an abstract class. They are applicable if you have to use a local class just once. A local class is a declaration while an anonymous class Java is an expression.

Since the anonymous class is an expression, it has its syntax which resembles the invocation of a constructor. The point of difference is that there is a class definition carried within a block of code. For instance, if you want to instantiate an object, consider the following code:

By following the same procedure, it is possible to override the methods of the concrete together with the interface using the anonymous class.

The expression involving anonymous classes has the following segments:

? The new operator
? An interface name to be implemented or a class that can be extended. In the above example, the interface ?AnonymousInner? is being implemented by the anonymous class Java
? The opening and closing parentheses resemble that of an expression for instantiating a local class. During the implementation of an interface, no constructor is employed, hence empty parentheses are used.
? It also contains a body which contains class declarations as well as method declarations. Statements, on the other hand, are not allowed in the body of the anonymous class.

Importance of the Java Anonymous Class

With anonymous inner classes, it is possible to override a single or multiple methods within a superclass. The main reason why programmers prefer to create the Java anonymous class instead of a new separate class is that it is much quicker. If you want to override a few functions, for instance, a single method within a super class and wouldn?t like to go into details of creating an entirely new class, then an anonymous class is your perfect option.

In most cases, it is referred to as an anonymous inner class. That is because the class created in the super class (anonymous class) has no name.