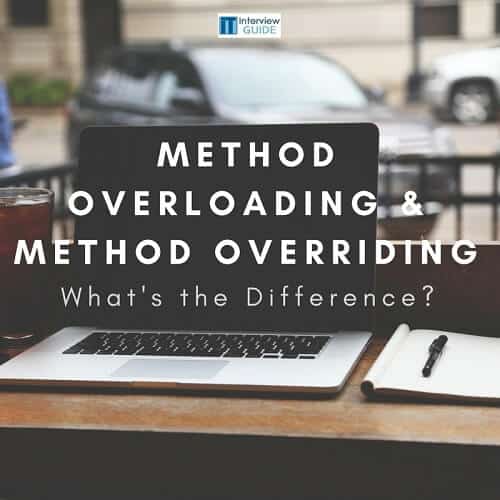 In Java, method overloading and overriding are frequently used to optimize code and its readability. This article walks you through the main differences between these two practices.

Method overload is calling the same name method multiple times in the same class; these methods can have different parameters and return types. Method override, however, calls the same method in separate classes – parent and extended child class – and the overriding method must have a specific return type in relation to method in the parent class. Here’s how they differ in usage and performance:

A programmer using method overload will declare the same method under one class. For example, he might have an add() method that can take a varying number of integers and return their sum or difference. Here’s what it would look like:

In the above example code, the math() method is overloaded, with different parameters and definitions to perform varying math operations. The methods are called within the same class Sum. Here’s the output:

In method override, a programmer declares a method in a parent class and its extended class. Unlike method overloading, override requires the methods to have the same parameters and return types that are return-type-substitutable. Simplified, this means override method return types must be the same or covariant. Below is a sample code from beginnersbook that demonstrates how method override can be used:

In their example, method speedLimit() is called in the parent CarClass and its extended Ford class. At run time, following the declaration CarClass obj = new Ford(), the speedLimit() method in Ford class overrides the method in its parent class.

The argument and return type is the same for method override, whereas parameters and argument list must be different for method overload. Here’s a simpler example from Intel that used method override, where the return type is the same across the methods and neither are taking arguments. The overriding method differs only in the value that’s printed for a specific Dog class that’s extended from a more generic Animal class:

Method overloading is typically used to enhance program readability and support different parameter types, whereas method override is meant to execute a specific implementation of a method. In the sample code above, method override was used to implement the speedLimit() method for the Ford instance.

Recommended read: If you really want to be prepared for your interview on Java, check out these Java interview questions and answers.

Method overload and method override are used in Java programming to improve how a program reads and runs. For example, method overload uses the same name method to perform similar functions, like various math operations with a different argument list. When assessing when to use method overloading and overriding, programmers should consider their difference and usage to decide how each can be applied to optimize their code.