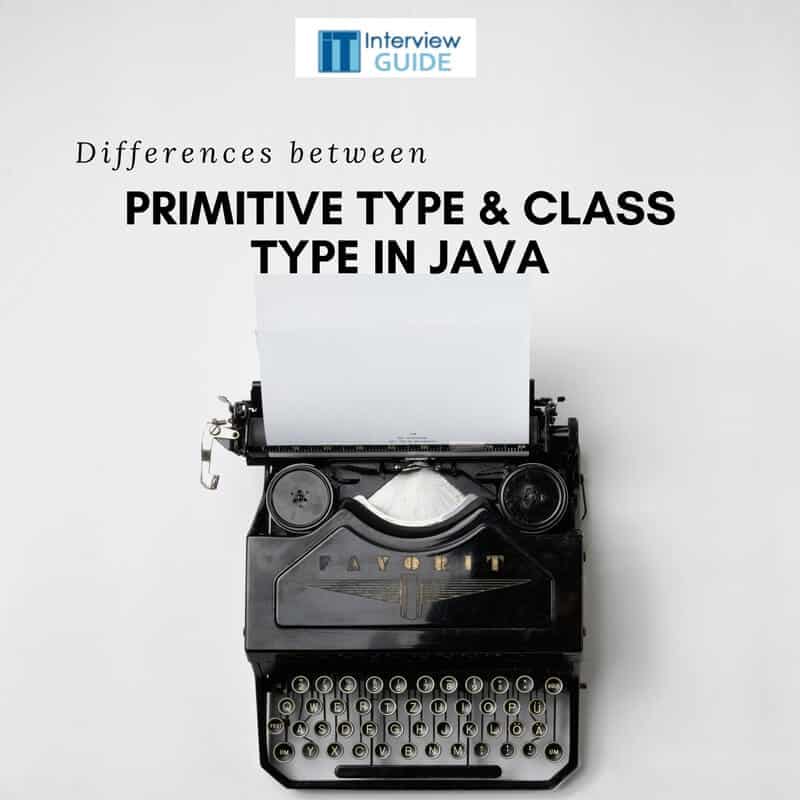 All variables used when coding with Java must have a type. Types tell Java how to treat a given variable. They also govern the operations that you can carry out with a particular variable. Java has several types broadly categorized under Java primitive type options and Java class types. If you are asked to provide the differences between these two in a programming interview, you can use the following answers.

Primitive Type vs. Class Type in Java: What is the Difference?

Primitive types in Java are the most basic data types for describing a variable. They include integers, float, Boolean, character, double, long, and short. All numbers with no decimals in Java are of type integer (int). Double describes numbers with decimal points, Boolean describes true or false values, and characters describe letters of the alphabet. You should note that it is incorrect to invoke a method on primitive data types. In addition to that, they have a smaller memory footprint as compared to class types.

A class type, on the other hand, is a variable that is used to name an object. In an object oriented programming language like Java, all objects within a class have the type ?class.’ You will find that the objects are far much more complicated than simple integers, characters, Boolean, and double among other primitive types. Therefore, such variables are categorized under the Java class type. Class types occupy a large memory space. They also carry large volumes of data that can be invoked by methods when developing a program.

Another difference between a class type and a primitive type is how they store data. When you declare a primitive type, it is implemented as a storage space in your computer memory. For instance, if you declare an integer variable as y = 5, the y location within the memory will contain the number 5. However, this is quite different when dealing with class types.

Variables of class type only store the memory address of the object and not the value contained in the object. This implies that the object being described by the variable is stored in a different memory location. You will have to follow the address found in the variable to access the object values themselves. For this reason, class types are often deemed as reference types.

When Should You Use Primitive Types or Class Types?

The choice of a data type in Java depends on the context in which you want to use the type. However, it is recommended that you opt for primitive types first since they are more intuitive and have less overhead. The autoboxing and auto-unboxing processes in Java make it quite easy to perform operations with primitives such as ?int?. Using class types may prompt you to use wrapper classes, which can get rather chunky and complex.

Basic Java data types which do not contain objects are called primitive types. A type whose variable contains a reference to the specific location of an object value is a class or reference type. These are the important points to note when exploring the differences between class types and primitive types in a Java programming interview. Make sure to leave your comments or thoughts in the comment section.