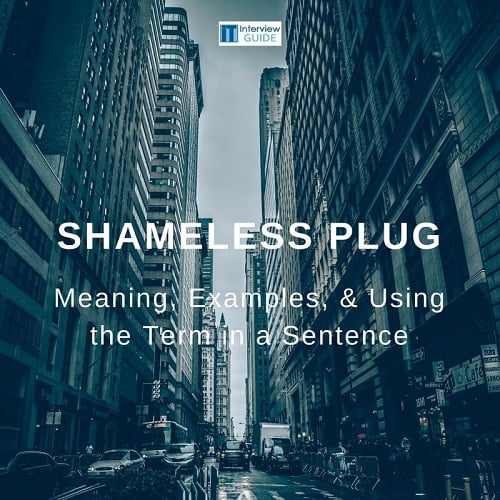 To plug something also means to advertise it; therefore, the informal term ?shameless plug? refers to a blatant attempt of promoting or advertising a service, product, or business. The term most often refers to blatant attempts of self-promotion. Nevertheless, it can also be used when advertising other people/businesses. Therefore, a shameless plug is the equivalent of spam in the online world.

But not only advertisers or businesses can pull the shameless plug, people can do it too. Think about it. How many times during a breezy conversation do friends or coworkers try to advertise their belongings or their way of doing things?

Although there are no perfect synonyms to this saying, there are a few words that can be used in its place. Another word for shameless plug is promotion, but mention, recommendation, or boost also work well. However, these do not convey the same nuance as the shameless plug saying which has negative implications.

Using Shameless Plug in a Sentence

And if we really think about it, we can use shameless plugs, too. Because no interview candidate should settle for just one non-technical interview question which might not even come during the interview! For better chances of landing the job, check out our other articles!?You might like our answers to?what does ?pushing the envelope? mean?or the difference between an elk and a moose?questions.