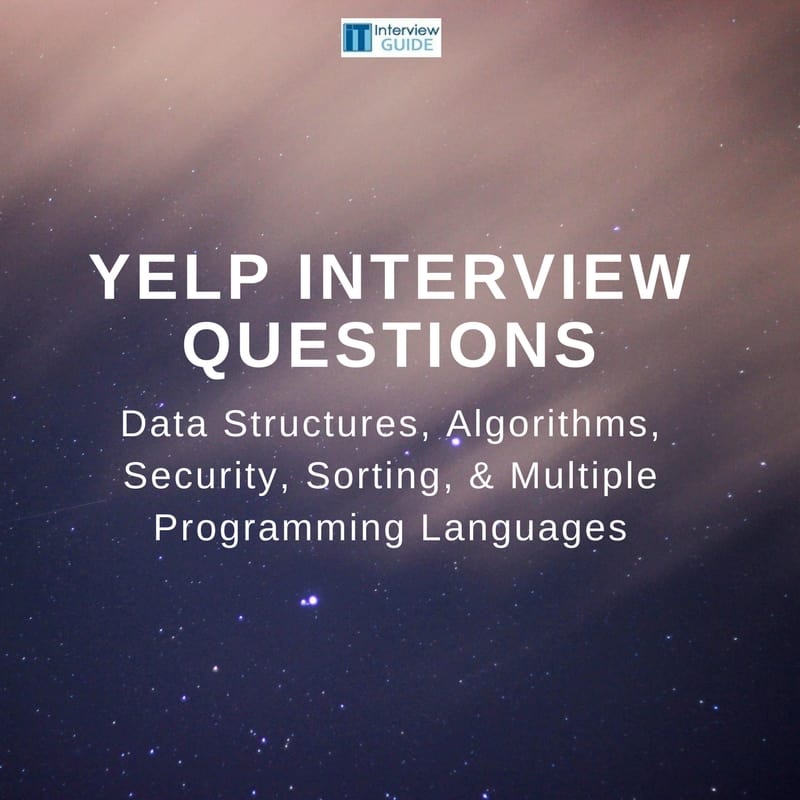 Question 1: What is a Linked List as in Data Structures in Programming.

Linked lists are made of linear data elements called nodes where each of the nodes is linked to the next one through a pointer. The items are treated as separate objects. Linked lists are often dynamic structures which can be grown, made smaller, or reversed on demand. They take up more memory than arrays, for example.

Related: Data structures are common when it comes to Yelp interview questions – check out these?20 Data Structures Interview Questions & their Answers!

Question 2: How Do You Find Out if a Given Linked List Has a Loop?

You can employ the two-pointer technique to get a solution for this problem. While maintaining the two pointers, increase a single pointer upon processing two nodes and the other pointer after processing every node. In a situation where both the pointers are pointing to the same node, then the linked list has a loop.

Question 3: What Are the Divide and Conquer Algorithms and How Do They Work?

These two algorithms are a means of solving problems involving numerous standard steps. The divide step is the initial step. Here, the problem splits?into several bits. Then, we try to solve?each of the problems independently. When the results are successful, the system combines various solutions to form one integrated answer to the problem.

The ?sub-problems? be can further divided into small problems in a recursive manner. Examples of such applications include binary search, sorting algorithms and exponentiation in mathematical operations.

Note: Some interviewers might expect some specific examples, so always do your research on the company beforehand to provide relevant ones. This actually applies to all of the Yelp interview questions in this article.

Question 4: When is the Register Storage Specifier Used?

Usually, some variables are frequently declared. The register storage specifier saves?such variables for quicker reference. The compiler gives the CPU register its storage in the process and the variable is invoked faster upon demand.

Question 5: What is a Dangling Pointer?

This is a situation where a pointer that was initially holding address becomes free. Upon releasing the address, the pointer remains a dangling pointer.

Even though this question has the longest answer of all these Yelp interview questions, it’s among the simplest ones because it refers to sorting algorithms which should be basic knowledge.

Question 7: What Are Some Differences between HTML and Java Programming Languages?

The thing with working for Yelp is, you need to ace more than one programming languages. This is why some of the Yelp interviews are so challenging.

Question 8: In which Programming Language is Yelp Built?

Yelp is majorly built with Python programming language. We could even refer to it as all python on a custom framework. There has also been a small use of Java in the search related items and mobile support systems.

Question 9: What Is SSL and What Is it Used for?

SSL is an acronym for Secure Sockets Layer and is the most commonly used security protocol today. It plays a role in providing a secure channel between two computers communicating via the internet or an internal network. This protocol is used especially when a web browser needs to communicate through a secure channel with the web server in the ever insecure internet.

HTTP is an application protocol for collaborative, distributed and hypermedia info systems. It forms the basis for data communication within the World Wide Web (WWW). It mainly operates in a request-response protocol in a client-server computing model.

This is a nontechnical interview question seeking to know more about you. Unlike in the technical first ten Yelp interview questions, here you must?give your honest opinion why you want to work for the company in question. You can mention your strong suits and how you think you can use them to help Yelp meet its objectives.

Recommended: If you want to see more questions that might come up during your yelp interview that focus more on your problem-solving ability and thought processes than on your technical abilities, make sure you check out our non-technical interview questions section.?

Question 12: What’s the Difference between Stack and Queue Data Structures?

Question 13: What is Dynamic Programming?

Question 14: What’s the Difference between the Dijkstra and Prim Algorithms?

Dijkstra is an algorithm designed for getting a single source shortest path. Prim, on the other hand, only becomes active?when looking for the minimum spanning trees. The two have a similar implementation.

Modular programming refers to diving a program into?subprograms called modules or functions to solve a particular task. The modular approach is used in cases where there exists a need to re-use functions such as the innate library functions. This is achievable for generic functions.

Yelp interviews can take different courses. Therefore, they require a broad knowledge in various programming fields. This article provides you with the standard Yelp interview questions picked from varied platforms to help broaden your knowledge. Also, make sure to look into some non-technical questions about Yelp.