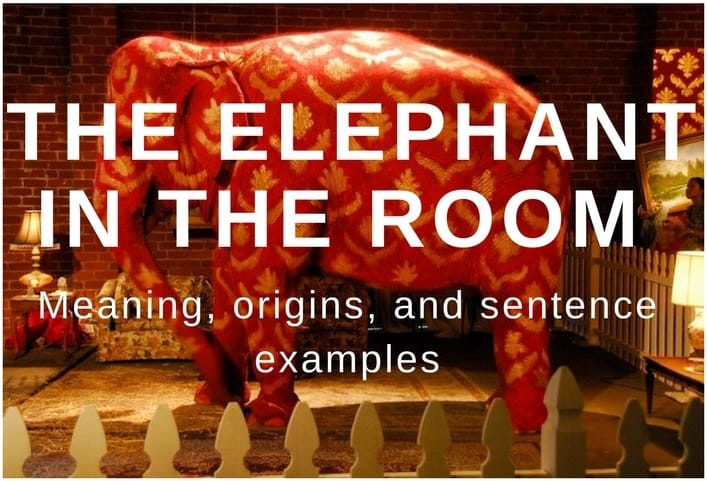 The elephant in the room meaning: a situation, problem, risk, or topic everyone present is aware of, but does not address or challenge it. It usually refers to topics that make people uncomfortable, sensitive matters of morality, or simply matters that are difficult or unpleasant to talk about.

Origins of the Elephant in the Room Saying

Russian poet and fabulist Ivan Andreevich Krylov mentioned a man who does not notice an elephant in a museum he visits in a fable called The Inquisitive Man in 1814. This saying quickly entered the common language and was even mentioned by Dostoevsky in his Demons novel:

Belinsky was just like Krylov’s Inquisitive Man, who didn’t notice the elephant in the museum…

The first recorded use of the expression according to Oxford Dictionary dates back to June 20, 1959, when a New York Times article mentions the following:

Financing schools has become a problem about equal to having an elephant in the living room. It’s so big you just can’t ignore it.

Nevertheless, the saying has been used in writings older than this mention. 1915?s Journal of Education (British) asking students whether there?s an elephant in the classroom or not is one example, but Mark Twain?s The Stolen White Elephant (1882) is much more popular. The story describes how detectives fail to find an elephant that was right in front of them. Philosopher George Berkeley used to talk about an invisible elephant in the room while debating with different scientists.

With time, the expression became more popular and even gave way to two new ones. The white elephant in the room refers to a possession that?s costly to maintain and difficult to sell or get rid of ? usually gifts. The pink elephant, however, refers to someone who is confused or to a hallucination.

Elephant in the Room in a Sentence

?Is nobody going to address the elephant in the room? We can?t go on vacation if you?ll soon be out of a job!?

?And after she calmed down a bit, the new guy decided to address the elephant in the room and told her she is way too sensitive to criticism. She didn?t take it well.?

?Even though we all knew it, nobody could say anything about it out of embarrassment; it truly was the elephant in the room.?