Although most questions you will encounter during an IT interview are technical, some employers choose to surprise their interviewees with non-technical interview questions to observe their thinking pattern and reactions. In this article, we?re going to give an in-depth answer to how fast can a cheetah run. The cheetah, also known as Acinonyx Jubatus, is the fastest land animal and can reach 75 miles per hour when running. They can reach their top speed in just 3 seconds; nevertheless, male and female cheetahs can only run this fast for short amounts of time; their long-distance running speeds average around 40 miles per hour.

How Fast Can a Cheetah Run Long Distances?

Even though cheetahs can reach 75 miles per hour when running in bursts, the average long-distance running speed of a cheetah (while hunting and chasing pray) is around 40 miles per hour.?Therefore, how fast can a cheetah run greatly depends on the distance the animal needs to cover.

For context, a Thomson’s gazelle (Eudorcas thomsonii) can reach a maximum running speed of 40 miles per hour – the same as the cheetah’s long-distance running speed. This is why chases between cheetahs and gazelles are most of the time intense and sprinkled with close calls. 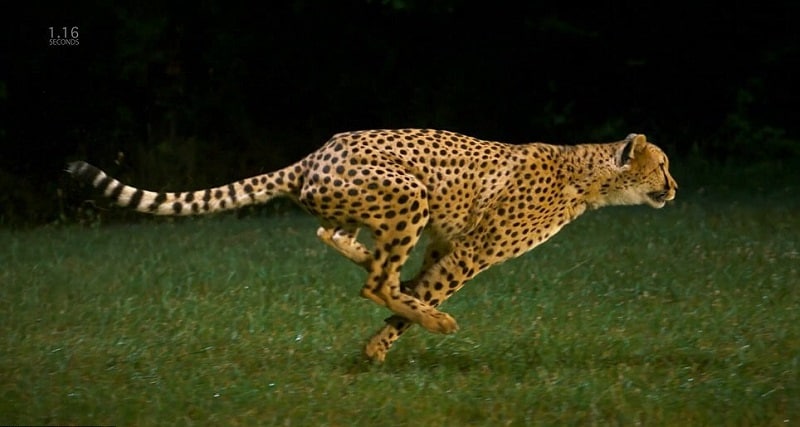 A cheetah?s tail has a lot to do with its running abilities since it helps steer and keep balance. In addition, a cheetah also uses its claws as cleats. But the most impressive trait nature gave cheetahs is the black ?tear marks? underneath the eyes ? specifically, from the interior corner of the eye to the exterior of the mouth. These reduce the glare from the sun and also act like sights on rifles, helping cheetahs see and aim better when attacking.

This video provides a depiction of how cheetahs can achieve these impressive speeds:

How Long Can Cheetahs Run at Top Speeds for?

Although incredibly fast in short running bursts and reaching 46 miles per hour in just two seconds, cheetahs can’t really sustain this running speed for more than 400-500 yards as their bodies easily overheat. By comparison, humans can run for about 220 yards with a top speed of 30 mph.

When running at top speeds, cheetahs nearly triple their respiratory rates going from 60 to 150 breaths per minute, and this goes for heat production as well. In addition, cheetahs store A LOT of their body heat – up to 90%, compared to 20% found in African hunting dogs, for example.

Although cheetahs can reach 75 miles per hour when running in short bursts, they have an average running speed of 40 miles per hour, skill which has been perfected only after millennia of evolution and natural selection.

Other recommended reads: If you are interested in more non-technical interview questions, check out our articles on the difference between a buffalo and a bison?or see our clarification about the whole elk vs. moose jumble.